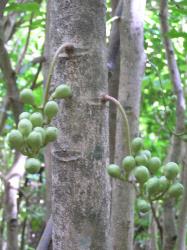 Long poles used as a framework in the kehe trap-net. (Te Rangi Hiroa 1926)

Used in furniture making (Colenso 1868a). (N.B. - details on colonial timber uses generally not part of this database).

"The large leaves of this beautiful tree are extremely bitter, and may be used in the same way as Peruvian bark" (Taylor 1847).

The leaves are remarkably bitter and the infusion is used as a tonic; a weak decoction is also used by females who have lost their infants, to stop the secretion of milk (Taylor 1855)

"... called by the natives koa-koa. It is the Hartighsia spectabilis of De Candolle. It is said to possess the properties of gentian, and to have been substituted for hops in the manufacture of beer. The leaves yield a very bitter extract" (Pereira 1846)

Macerated leaves in hot water to make very weak decoction to stop secretion of milk. Not taken more than once a day. Tonic for invalids to strengthen stomach and allay cough. ( Brett"s Guide 1883 ; Taylor 1855, 1870; Neil 1889; Kerry-Nicholls 1886).

Half fill a billy with leaves. Cover with water. Boil for about 15 minutes. For sore throats, use as a gargle. For boils, bathe the boil with the liquid. Use the boiled leaves as a poultice. Drink the liquid before meals. For coughs and women"s disorders - half a cup before meals. Pick the leaves facing the sun. (P. Smith 1940).

Related pharmacology and interesting notes on chemical compounds, in Brooker, Cambie and Cooper 1987.

See Riley 1994 for information on medicinal uses of related plants elsewhere in the world.

The wood of those trees is alike soft, and won't last long in the water; besides canoes made of them are both heavy (when water-logged) and slow.