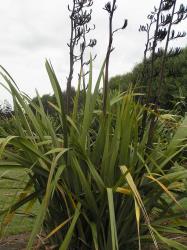 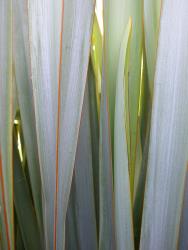 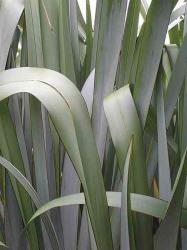 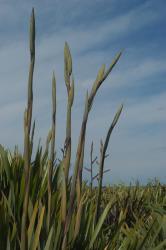 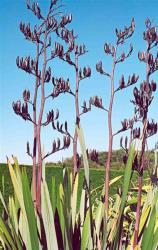 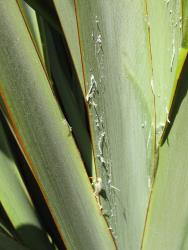 Pā harakeke - a grove or plantation of flax, often denotes a number of cultivated plants.

Pū harakeke - a single plant or bush of flax.

Fleshy side of leaf: pūreke (from Best). Name for a rough raincape, made from undressed leaves.

Next leaf or leaves to rito on either side; upright: iho

Next leaf or leaves to iho on either side: taumai ? (In Best ms - invalid.)

Additional terms for harakeke: "In the North Island, the Flax-plant is also known as the "Harakeke, " or "Herekiakia - its usual name there. Deiffenbach defines what is obviously the same term, "Herakiaki," as "green dried flax," while "Arakeke" is "undressed flax". The lower part of the flower stem is "kaikaha"; the outer part of the leaf "Pārakōka;" the refuse of the leaf "hungahunga"; the flax, dressed or not, or scraped fibre, manufactured from the leaf, "Whitau", or "Muka". (Lindsay 1868)

"In Otago, the general name of the plant...is Korari, or as metamorphosed by the settler pronounced and spelt "Kouradi, or Coradi" (Lindsay 1868)

"This plant when in bloom has the calyx of its flowers filled with honey or rather with a sweet water which the natives drink; one plant will produce nearly half a pint. At the root of the leaves is found a considerable quantity of semiliquid gum, which is also eaten". ( Taylor 1847)

Flowers contain honey in such quantities that the natives collect it in calabashes (Taylor 1855).

On the coast, the level of honey within the flower rises and falls with the tide (see explanation by R. McDonald in "Te Hekenga"). Brockie 1996 refutes this.

WEAVING. PLAITING. Many references in other records. Some miscellaneous comments noted here:

Woven fibre used as napkin during menstruation, lined with soft moss on the inner side, which was replaced from time to time (Makereti 1938)

A yellow colour is given to flax by holding the fresh leaves over fire (Thompson 1859). Description of cloak making in Colenso 1868b.

"Admirably adapted" for paper manufacture. "The flax, when immersed in a solution of alum, is readily converted into a pulp..." There are many varieties of this valuable plant. (Taylor 1855).

"There is a swamp ... at Port Molyneux called Tokoroua... famous for the dye it produces. ... Only place in South Otago where the proper kind of paruparu .. for dyeing whitau can be found. The mud found elsewhere would turn the whitau red or rusty looking, but the Tukoroua mud made it a beautiful black... Such a reputation had this place that people would come down from the North to get their mats treated with the dye from this swamp" (Beattie 1920)

Fishing nets made of split but unscraped leaves. Leaves plaited for net-ropes. Excellent fishing lines spun from the dressed fibre. Fibres used to lace across raupō leaves for canoe sails. (Colenso 1868a, 1868b, 1891b); Tuta Nihoniho, in Best 1925).

Floats made from dry stalks for crossing rivers. Called mōkī and mōkihi. Sometimes used as floats for individuals, or else made into a boat (Best 1942).

Bottom and sides of canoes on Chatham Islands made of kōrari. Called waka puhara or waka kōrari (Best 1942 ; Shand 1911).

Also used in construction of ceremonial craft on Chathams - waka rā. Muka used to make "bobs" to attach bait to when fishing for eels. Narrow dried strips of undressed flax used to make hoop nets, used by women for catching kokopu (Galaxias). Another style of net called kape made of dressed flax fibre, used by men. Another net used for holding kokopu and eels is called rohe and is made from strips of flax attached to a supplejack hoop ( Best 1902).

Used for nets, fishing lines. Whitebait caught in fine flax baskets. Fishing practices in Southland described. Flax used to call in weka during the hunting season. Blow (whakataki) on flax held between the lips. Kaka - caught using decoy. "The bird could gnaw through green flax, so their legs were fastened with dry flax amid an appalling din". Preserved in kelp bags. (Beattie 1920).

Green leaf used for writing on - etched with nail or hard wood (Colenso 1868a).

Pith of kōrari used for tinder after the introduction of flint and steel.

Brush for painting made from flax tow tied to a stick ( Best 1925).

Green flax tied up the posts of a storehouse to prevent rodents getting in - their feet had no puchase on the slippery leaves. The ends of the flax were bent outwards. (Beattie 1994).

Sleeping mats were laid over rushes and tussock. The under one was a tiaka-wahi (unscraped green flax) and the one above it on which a sleeper lay was a tiaka-haro, of fine scraped flax, which had usually been steamed in an earth-oven and was very white and soft. Bed coverings were mats of soft whitau (prepared flax fibre) called kakahu (Beattie 1994). Tuwhara - coarse floor mat of undressed flax. Makereti 1938 described a tuwhara as a long, narrow, plaited strip of flax, 3-4 feet wide, 20 feet in length.

Fire-fans, piupiu ahi, woven from harakeke. These fans avoided the need to rekindle the fire by breath, which might lead to a breach of tapu. (Te Rangi Hiroa 1924 : 353-354)

"Baskets of flax were used only when pork was being cooked at a meeting, when the very large parts were cooked in one piece. Pork would be placed in a large but old flax kete (basket). Green flax would seldom be used, as it gave food a bitter taste." (Makereti 1938)

Interior of verandahs and sides of chiefs" houses patterned with pīngao, kiekie and harakeke. (Colenso 1868a, 1868b)

For diarrhoea -"I can also speak very highly of the flax gum ... a mouthful repeated every hour until cured" (O"Carroll 1884).

Gum from flax used to stuff into a hole in the tooth for toothache (Beattie 1920).

Mixed with bush lawyer. Taken for difficult menstruation - 4 pieces of flax root boiled with 4 pieces of aka taramoa (bush lawyer, Rubus sp). Pieces must be taken from east side of plants for this particular complaint. For other complaints, materials may be taken from any part. Lotion used for ringworm (Goldie 1904 ; Best 1906, 1908).

For ague - centre part of one root of harakeke, 12 leaves of kohukohu, leaves of 3 ordinary sized branches of the matoutou (a small tree that grows at Patea and the inland district of the Waitara). Boil in just sufficient water to cover the leaves until the parts appear cooked. Strain when cool. Dose: one paua shell full (about two tablespoonfuls), night and morning. (O"Carroll 1884).

Use of chewed root or decoction for constipation recorded by (Te Rangi Hiroa 1910).

Root pounded, juice used as a lotion for ringworm. Used to prevent galling of skin of infants. Taken internally to stop bleeding of bowels, dysentery. Pulp of bruised root as styptic. With kōhia berries, for flatulence. Gum at fold of leaf near root applied to burns, scalds and old sores. Roots roasted and beaten, used warm as poultice for abcesses or swollen joints and limbs (Brett"s Guide 1883 ; Colenso 1869a ; Yate 1835 ; Taylor 1870 ; White 1887).

Decoction of leaf and root used for cutaneous diseases, as a purgative and a worm medicine (Kerry-Nicholls 1886).

Strong decoction of roots and butts of leaves boiled for 12 hours excellent for healing wounds, lacerations and amputations. Monckton used it in hundreds of cases. (Monckton 1885 ; also quoted in Aston 1923b.

Extract of root used as an aperient (recipes given) and for chilblains ( Neil 1889).

In tattooing, after each incision, the cutting tool is dipped in a liquid in which the powdered root has been mixed. Also, substance of root or leaf heated, and applied to an affected area ( Servant 1973).

In South Westland, toothache cured with the juice of the flax root ( Madgwick 1992).

The thick, fleshy part of the leaves at the base are boiled. This yields a bitter drink which the Māoris sweeten with cane sugar and use for constipation. ( Miller 1940)

Mucilage at the base of flax leaves used for burns. The mountain species were more valuable. Rhizome used for worms, for stomach disorders and ringworm ( Given 1940)

a) Get some kōrari (Phormium) roots. Take off the outer skin and put the roots into a billy. Cover with water. Boil for about 15 minutes. Use as a mouthwash or as "Epsom salts" (a purgative). b) Soak roots to soften. Roast and make into a pulp. Use for abcesses and chilblains. The soft material at the base of the leaves is said to stop bleeding. ( P. Smith 1940).

Infusion of flax-root, tataramoa and raupō root boiled together, used as cleansing remedy to assist in removal of placenta (M. Withers, Opotiki, 1941).

"Tungia te ururua, kia tupu whakaritorito te tupu o te harakeke. Set fire to the scrub that the flax plants may shoot forth young evergreen shoots. Meaning: Clear off the old and bad that the new and good may grow vigorously." (Colenso 1879: 119)

Said that Taitua first introduced better flax (to Urewera), from Waikato, some six generations ago (Best 1898). Some beliefs, rituals connected with planting flax in Best 1942.

Flax and kiekie seen as brothers who had long been separated. Wainui, the Mother of the Waters, took harakeke as her favourite and he loved to play by her side at the fringes of swamps and streams. Kiekie went with Tāne and was carried piggy-back wherever they went (Anderson 1954)

In  Best 1925: Outer woven bag for poi, filled with raupō down. Simple clappers made from leaf bases (Tuta Nihoniho, Ngāti-Porou). Among Ngāti-Porou, fan of flax leaves sometimes used in place of cabbage trees for toboggan. A kind of temporary trumpet, tetere, made from green leaves. String of musical instrument called a ku made from whītau (Canon Stack, in ibid).

In writing about kakabeak, Colenso 1885, describes how the hundreds of pods ripen, burst, and the seed falls to the ground, yet he scarcely sees seedlings around the parent plant.;" and this great peculiarity obtains also in a large measure among the Phormium species"