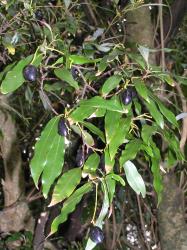 "The fruit of this tree has somewhat the appearance of a Wine sour plum, it is very sweet, with a slight flavour of turpentine; the kernel, when cooked, is also eaten; the bark when infused furnishes the traveller with a wholesome as well as a grateful beverage which does not require the addition of sugar." (Taylor 1847). Also Taylor 1855.

The prepared berries were among the foods presented at a feast attended by T. H. Potts (Potts 1879)

See 4 page section in Best 1942 on processing berries. Pulp not so pleasant. Turpentine flavour. Berries put in water, trampled, kernels steamed for more than 12 hours, dried. Steamed again when wanted, to soften, sometimes crushed. Berries could also be gathered and steamed in a hangi for 2 days or more (the process is called taopaka). Tūhoe lined hangi with 6 different plants - karamū, heruheru, manono, hangehange, rautāwhiri, pāraharaha. First 5 plants for a desirable brown appearance, pāraharaha for flavour. When required for food the dried kernels were stoneboiled and pounded. The kernels were sometimes roasted before a fire, and, when heated, explded with a popping sound. (Best 1908, 1942, 1903).

Ovens used for steaming tawa kernels were long ones, not the small round kind generally used ( Best 1903). Ripe tawa juicy.. not unpleasant to taste. The kernel is very like the seed of the date, and very hard. The collection and processing are described in Makereti 1938.

"Berries which were needed for immediate use could be eaten as soon as they were cooked, but the dried and stored tawa had to be soaked in water and placed in a hangi for several hours until they were soft. They were dark brown, and the water in which they were soaked was quite thick when the tawa was ready to eat. We had plenty when I was a child and I used to enjoy them. With a little sugar, they were very nice indeed" (Makereti 1938).

Very long bird spears (30-36 ft.), "the working of which out of a large tree with only their stone implements, obtaining as they did but two spears from a single tree, was indeed a most patient and admirable performance, often taking two years for its completion." (Colenso 1868a, 1868b, 1891b).

Wallace 1989 found a paddle and 2 eel clubs made of tawa among museum artefacts he tested.

Aromatic bark may have commercial use - "belonging to the same natural order with those producing the cinnamon, cassia, sassafras, benzoin, and camphor of commerce" (Colenso 1868a)

Bark decoction for wounds (with rimu and tutu) used by Tūhoe (Goldie 1905).

Related pharmacology, see Brooker, Cambie and Cooper 1987.    Isoboldine and other alkaloids isolated from the berries  (Russell and Frazer 1969).

See also Cambie 1976 - beta-sitosterol recorded as isolated from the bark of tawa. It is a major component of an American proprietary drug used to lower blood cholesterol levels.

See also Riley 1994 for information on medicinal uses of related plants elsewhere in the world.

Of a noisy child, it is said " Ko te ahi tawa hai whakarite" (It resembles a tawa fire). Ahi tawa refers to the fire at which tawa kernels are roasted (and popped).

The tawa tree is sometimes termed tawa rau tangi, from the rustling sound made by its leaves in a breeze. (Best 1908)

He tawa para! he whati kau taana! A tawa pulp! he only runs away!"

"The tawa... bears a large purple fruit, in which there is a single stone or kernel, not wholly unlike that of the date; this is exceedingly hard, and cannot easily be broken; the pulp.. of the fruit is very soft when fully ripe; hence, from the one fruit, the comparison is drawn of the hero and the coward." (Colenso 1879: 138)

Menstruating woman could not cook tawa berries. If she did, they would not be cooked. (Makereti 1938)