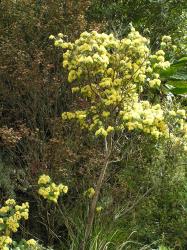 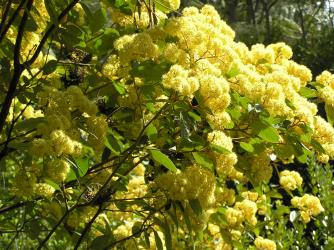 Use for chest ailments suggested during World War II. Value doubted by some. (Wall, Cranwell 1943).

An excellent blood purifier; said to be effective in the cure of bronchial and tubercular complaints. I heard recently of someone using it for diabetes, with good effect. It is interesting to note that none of the other Pomaderris have medicinal properties. (K. Pickmere 1940). Recipe and doses for infusion for asthma and chest complaints. Also consumption (kohi). Put a good handful of dried leaves and young shoots into a billy. Well cover with water and boil until the liquid is a dark brownish-red. Strain and bottle. For a cough, take a teaspoonful, mix with water. For asthma, 2 tablespoons. Take 2 or 3 times a day. Sometimes sugar or peppermint added to improve the taste. Sometimes used as a bath, said to be good for the skin, especially for little children. (P. Smith 1940).

Kūmarahou is packed as such, and appears to contain a glucoside which is of benefit in pulmonary complaints (Given 1940)

Brooker, Cambie and Cooper 1987 state that kūmarahou mixed with other herbs, particularly koromiko, was marketed by Rev. E. Ward (1863-1934) under the name `karanui" and claimed to be a specific for tuberculosis and asthma. An ointment made from kūmarahou was sold in Auckland for skin cancer, and used as a medicine at Te Kao many years ago. Related pharmacology (ibid.).

Chemical compounds in leaves investigated by Cain and Cambie 1959.

When kūmarahou in flower, near time to plant kūmara (Matthews 1910, Anderson 1954)