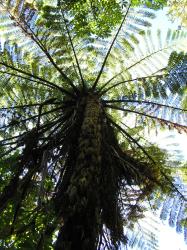 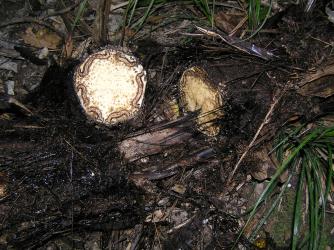 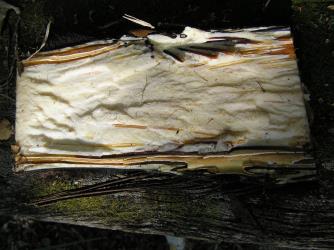 "The tender shoot of this fern tree when cooked, is eaten as well as a portion of the medulla, it is rather insipid but not disagreeable" (Taylor 1847)

Inner stem eaten. Described in detail. "...an agreeable article of food, slightly sweet". When cooked, called pitau. "It is not improbable, that if it were dried it might be used as sago". Highly prized in winter. (Taylor 1855)

Pith of stem extensively eaten, a favourite dish; when dried in the sun, a poor substitute for sago. Undeveloped fronds sometimes boiled (Kirk, in Taylor 1870).

"This esculent appeared in thick junks of about a foot in length; it is the mucilaginous pith of the great black tree-fern Cyathea medullaris. It was presented ready dressed, was soft, very sweet to the palate." (Potts 1879).

Pith slimy but sweetish. Cut into thin slices and cooked for a long time in the hangi. Slices were threaded on a string of flax and hung up to dry in the sun (Makereti 1938)

Grew in South. "Chop it down and there are two horns like a cow"s. These are called piko and are eaten too as well as the trunk. The latter is put in the umu and said to take about 2 days to cook" (Karetai to Beattie, in MS 582/E/11, Hocken).

"In regard to the natural products of Otago he said, 'We had different kinds of fern-trees. The mamaku was not in this district although it was over on Stewart Island: but we had the poka, wheki, and katote' " (Beattie 1920)

In some parts of the North Island, pieces cut from the trunk were closely placed like a plinth around the lower part of the house, especially a sweet potato store, to keep out the rats and the wet (Colenso 1868a, 1880).

"The poultices the native doctors use are the convoluted top of the Mamaku.. boiled. This is certainly a strong drawer, and very quick poultice" (O"Carroll 1884).

Inner tissue of young fronds, before they have uncurled, used as a poultice for boils. Fronds not cooked ( M. Withers 1941).

Also poisoned hands, saddle sores on horses. Slimy tissue rubbed on wound or scraped and applied as poultice, either raw or boiled (Adams 1945).

The drooping fronds of mamaku often alluded to in Māori poems as symbolic of grief. "E piko nei, me te mamaku" (Te Whetu 1897)

In tradition of Horouta and introduction of kūmara to New Zealand, mamaku given to Kahukura to eat by Toi (Turei 1912, p.154).

Mamaku said to have been brought to South Westland by the Waitaha in the canoe Uruao (Madgwick 1992).