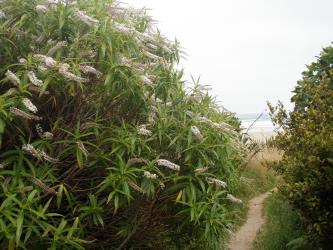 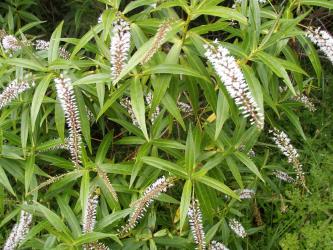 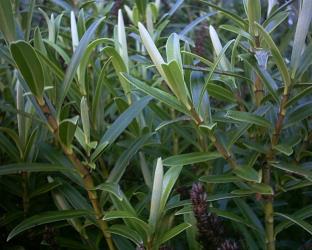 Veronica stricta is endemic to the North Island, and nothern South Island = koromiko

"Perhaps the most generally diffused plant in New Zealand, and a very ornamental one, but disappearing before the horse. Formerly large groves of it might be seen in every direction; it bears a tapering shaped flower, of a purplish white." (Taylor 1855)

Used with kawakawa and karamū leaves to line hangi. Said to impart an appreciated flavour to karaka kernels (Best 1942).

Among museum artefacts he tested Wallace 1989 found a kō made of Hebe sp.

Used by Māori and settler, especially as a remedy for diarrhoea

Decoction of leaves valuable in all complaints (Kirk, in Taylor 1870).

The buds of the unexpanded upper shoots of the little-leaved, small-flowering Koromiko ..useful for diarrhoea. Given in proportion to age. Six buds for a child under six years of age, and so on up to twelve for an adult. Chewed very slowly for vomiting. (O'Carroll 1884).

Leaves - infusion a powerful astringent. A weak infusion a tonic. Poultice for ulcers. Decoction for dysentery. A small portion of the leaf, if chewed, soon produces a keen sense of hunger. (Kerry-Nicholls 1886).

Decoction of leaves used for ulcers and venereal disease. Astringent, for dysentery etc. Recipes in (Neil 1889).

Used for diarrhoea, dysentery. "Bushmen troubled with English cholera frequently cure the disease by chewing fresh leaves of the plant and swallowing the juice - but usually the drug is taken in the form of an infusion. It is kept in stock by leading druggists in the colony" (Kirk 1889).

Shoots - pressed between the legs into the vagina for haemorrhage in childbirth. Buds, leaves - as Baber, notes that tincture or infusion not so effectual for diarrhoea. Bell also says he has "not yet noticed any marked astringent effect in a fresh decoction" (Bell 1890).

Listed in "Extra Pharmacopoeia" (London, 1895) as remedy for diarrhoea. Withdrawn in later editions. Leaves, shoots - poultice, ulcerated surfaces, sores, venereal diseases. Masticated and swallowed for dysentery. Decoction taken for dysentery, diarrhoea. Baber comments that an infusion of the dried leaves had no therapeutic effect, but decoction had. Used in vapour baths (Goldie 1904).

Remedy for diarrhoea - used by both races now (Beattie 1920).

Suggestion that chewing of young leaves, rather than decoction, the most effective (Aston 1923b).

Dried leaves were sent to Egypt in the war of 1914-1918 for the use of Māori troops (in letter sent by H. H. Allan, Director, Botany Division to Major Moor, Director General of Medical Services, New Zealand Army, 13 October 1941. Botany Division files 52/1.

Use during World War II for stomach disorders recorded by Wall and Cranwell 1943. Excellent remedy for dysentery or diarrhoea. The young shoots are chewed.

Walter Brockie, Christchurch Botanic Gardens, sent koromiko seeds to the Russian plant-breeding institute in the late 1930s - 1940. They wanted to grow H. salicifolia and test it on their troops in the field as a cure for dysentery. (Anon 1943, Brockie 2009)

Ceremonial use during war described in Taylor 1855.