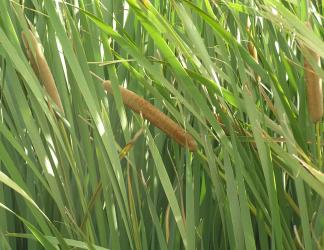 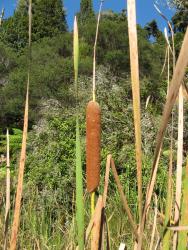 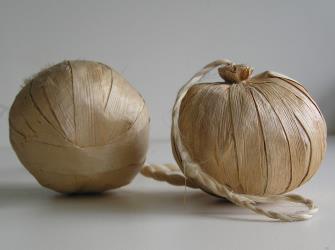 Pad of raupō leaves lashed over caulking of the attached sides of canoe: whara (Williams 1971)

Pappus of raupō, used as caulking in a canoe: whara hune (Williams 1971).

Pollen made into "gingerbread-like" cakes called pungapunga. (Colenso 1868a, 1868b).

Harvesting, preparation of pollen described. "[The] pollen, in its raw state, closely resembled our ground table-mustard; it was made into a light kind of yellow cake, and baked. It was sweetish to the taste, and not wholly unlike London gingerbread. Thirty years ago, specimens of it, both raw and baked, were sent to the Museum, at Kew. I have seen it collected in buckets-full." (Colenso 1879)

Rhizomes "The root of this sedge is filled with a fine mealy substance, which may be eaten" (Taylor 1847, )

Root yields fine meal which is eaten. Kirk, in Taylor 1870

The root..."often afford the hungry traveller a meal" (Taylor 1855)

Roots collected, dried, stored. When wanted for food, portion taken, soaked in water for one night, then put in wooden vessel (patua) and pounded with a potuki. Mealy part separated out, mixed with hot water to a kind of porridge. Seeds made into cakes or bread. (Best 1912 p.307).

Outer part of root peeled off, leaving the soft interior, the iho, which was eaten both raw and cooked in a steam-oven. Manuka beetle collected in summer and pounded up, then mixed with the tahuna of the raupo, packed in a small basket, cooked and eaten (Best 1902).

Eating of root also mentioned in Beattie"s notes (MS 582/E/11, Hocken). "Bulrush roots were called ko-areare; they were mashed and formed an article of diet with the old-time Maori" (Maori informant in Beattie 1920).

Leaves sometimes rolled up and used as fishing floats. Leaves used for canoe sails, laced with flax fibres. The downy pappus (hune) used for caulking and plugging holes in their canoes. (Colenso 1868a, 1868b ; Matthews 1911 ; Best 1925

In canoe making, koreirei (rootstock) used as an inset wherever the edges of two sections met ( Best 1925) Papatai = raupō put on the sides of a canoe (White, quoted in Best 1925)

In an account of the life of Tawhao, the Tainui chief, Tawhao one day constructs a tiny boat of raupō and on it fastened his aurei, greenstone eardrop. This was sent with appropriate incantations across the harbour to his loved one, Marutehiakina. (Te Hurinui 1945)

Down from raupō head invariably filled with small grubs; baked before using as filling for beds and pillows (Taylor 1855).

The leaves are used in lining and roofing houses (Taylor 1855)

Used for thatching of storehouses (Best 1916)

Colenso 1881 describes the building by skilled Maori artisans of a library and study in his garden. The totara framework "had three separate layers of raupo... in its sides (besides the outer coating of a stiff and hard, yet fine Restiaceous plant (Leptocarpus simplex). The raupo was first separated leaf by leaf, without breaking, and so carefully dried..."

The pappus of seeds was applied to wounds and old ulcerated sores as a protection against dust. (Colenso 1868a).

Infusion made of flax root, tātarāmoa and raupō roots boiled together as a cleansing remedy to assist in removal of placenta (M. Withers, Opotiki, 1941).

See Riley 1994 for information on medicinal uses of related plants elsewhere in the world.

"Tee whai patootoo a Rauporoa. Long-Bulrush did not strike loudly and repeatedly (so as to be heard)! or, Long-Bulrush gains nothing by his repeated attempts at hitting! This proverb is used by, or for, a person who returns without that for which he went." (Colenso 1879: 126)

Colenso goes on to explain: "... the tips of its long narrow numerous leaves are always agitated with the least breeze, and are naturally carried by the same in one direction before the wind; hence, they invariably keep the same distance from each other, or, if they clash, their striking is not heard, and is productive of no result. Moreover, as the longest plants grow only in the deeper water, the saying may also have a latent reference to the greater difficulty in gathering the flowering spikes from such tall plants."

Leaves of rushes used to plait receptacle for iho in baptisimal rite. (Best 1929)