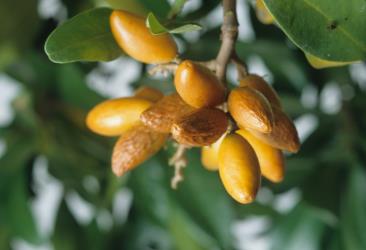 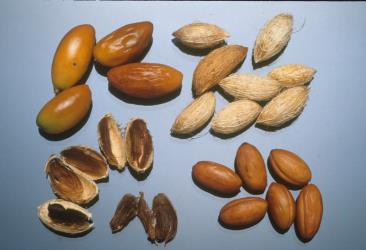 Fruits (kernels) are poisonous, but Māori used them as food after steeping in water and baking. Toxic activity thus reduced. Extensive preparation required. Didn"t last as long as tawa berries in storage. Karaka often planted around the villages. (Colenso 1868a, Colenso 1868b)

Preparation process also described in Makereti 1938. Once soaked "the berries are free inside their tough husk. When eaten, the tough husk was cut round the middle with a shell, and each half was pressed between the thumb and forefinger to get the soft substance out".

Pulp "...flavour not unlike that of a ripe medlar". Describes steeping process to soften fruit, "...smell being very offensive" (Allom, in Earp 1853)

"The fruit is not unlike a date,... has somewhat the flavour of the apricot, but too strong to be agreeable; it is called kopi and koroi; the kernel, after it has been boiled and steeped in water for some days, is eaten, otherwise it produces madness, and relaxes the joints, so that they will bend the wrong way... Natives state that this tree was brought with them." (Taylor 1855, 1847).

No karaka berries on Otago peninsula, but sent as gifts from the North (Tunuku Karetai, quoted in Beattie, MS 582/E/11, Hocken)

The wood when burnt is peculiarly offensive (Taylor 1855)

"The leaves... are wonderfully healing if applied to wounds, but care must be taken to place the shiny green uppper surface to the wound, as the duller, or whitish under surface of the leaf, draws equally as the upper surface heals". (O'Carroll 1884)

Nitro-compounds, such as karakin, are toxic to grass grub larvae Costelytra zealandica. Poisonous to stock (Allan 1944).

Some notes on traditions of bringing of karaka to New Zealand (Colenso 1881a).

Also White 1887; Vol IV. Karaka used as skids on Tainui canoe, hauled up on beach in Manukau. To be seen growing at Awhitu "to this day".

Tradition states karaka introduced by Turi of the Aotea (Te Rangi Hiroa 1949). Roau brought seeds or plants of karaka to New Zealand in canoe Nukutere, which landed at Waiaua, near Opotiki.

chalacha  (name as spelt by Solander)