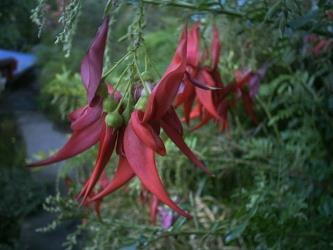 kōwhai-ngutu-kākā, kowhai no tugaga (sic. Name recorded by Solander in 1769).

Planted as an ornamental by Māori.

Taylor 1855 states that "this much admired shrub is only met with in the vicinity of old pas." Taylor thought it possibly introduced and gave an account of some boxes from a French vessel, full of seeds, which were emptied on a small island in the Kerikeri River. A few years later the whole island was covered with the plant. Flowers stuck in the ear as an ornament, and seed taken to "every part" (ibid).