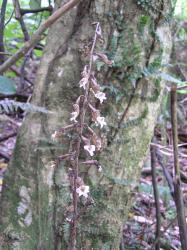 Paratawhiti is a general name for all species of 'para' (Beever 1991).

The rhizomes are branched, up to 25 cm x 5 cm, and filled with starch. The orchids are distributed throughout New Zealand in shady places, especially in beech forest, but can be difficult to find.

"This plant is found only in dense forests, and is a leafless parasite, with a brown scaly stem and flower, growing on roots of trees; it has tuberous roots in size resembling the Kūmara, but it is more prolific than even the Potatoe; the tubers when cooked are sweet and mealy" (Taylor 1847).

"The eleven specimens were growing close to the base of a large living rimu tree ... and nearly surrounded by its high and naked roots, projecting like ridges from its trunk, which no doubt had the means of preserving the roots of these plants, which are tolerably large and fleshy, and are edible both by man (the old Māoris) and pigs." (Colenso 1892).

Fleshy root eaten, but rather scarce, only found in dense forests. (Colenso 1880).

Described by an expert as "starchy, thick and tuberous roots" but Best only saw roots three-quarters of an inch thick. Roots formed a small part of the food supply, dug in winter season (Best 1902, 1907, 1942)

Common name of plant (perei) must not be mentioned when searching for roots or they won't be found. Courtesy term māukuuku used. Same tradition exists in other parts of the world (Best 1907, 1942)